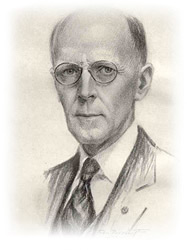 Paul P. Harris was the founder of Rotary. He was born in Racine, Wisconsin on April 19, 1868, and spent his early years in Wallingford, Vermont, prior to attending the University of Vermont, Princeton University and the University of Iowa. Following his graduation from the law school of the University of Iowa in 1891 he spent the next five years seeing the world and in coming to know his fellow man before settling down to practice law in Chicago.

He worked as a newspaper reporter, a business college teacher, a stock company actor and as a cowboy. He traveled extensively as a salesman for a marble and granite concern in the U.S.A. and Europe. These varied experiences broadened his vision and were of material assistance in the early extension of Rotary.

In 1896, Paul Harris went to Chicago to practice law. One day in 1900 he dined with a lawyer friend in Rogers Park, a residential section of Chicago. After dinner they took a walk and he was impressed by the fact that his friend stopped at several stores and shops in the neighborhood and introduced him to the proprietors, who were his friends. Paul Harris' law clients were business friends, not social friends, but this experience caused him to wonder why he couldn't make social friends out of at least some of his business friends - and he resolved to organize a club which would band together a group of representative business and professional men in friendship and fellowship.

For the next several years he devoted a great deal of time to reflection on conditions of life and business and, by 1905, he had formulated a definite philosophy of business relations. Talking it over with three of his law clients - Silvester Schiele, a coal merchant, Gustavus Loehr, a mining engineer, and Hiram Shorey, a merchant tailor - he decided, with them, to organize the club which he had been planning since 1900. On February 23, 1905, the club's first meeting took place and the nucleus was formed for the thousands of Rotary clubs which were later organized throughout the world. The new club, which Paul Harris named "Rotary" because the members met, in rotation, in their various places of business, met with general approval and club membership grew rapidly. Almost every member had come to Chicago from a small town and in the Rotary club they found an opportunity for the intimate acquaintanceship of their boyhood days. When Paul Harris became president of the club in its third year he was anxious to extend Rotary to other cities because he was convinced that the Rotary club could be developed into an important service movement.

The second Rotary club was founded in San Francisco in 1908 and then other clubs were organized until in 1910, when there were 16 clubs, it was decided that they should be united into an organization which would extend the movement to other cities and serve as a clearinghouse for the exchange of ideas among the clubs. Representatives from the clubs met in Chicago in August, 1910, and organized the National Association of Rotary Clubs. When clubs were formed in Canada and Great Britain, making the movement international in scope, the name was changed, in 1912, to the International Association of Rotary Clubs, and in 1922 the name was shortened to Rotary International. Paul Harris was the first president of the International Association. When he passed away in January, 1947, he was president emeritus of Rotary International.

While Paul Harris devoted much of his time to Rotary, he was also prominent in civic and professional work. He was the first chairman of the board of the National Society for Crippled Children and Adults in the U.S.A. and of the International Society for Crippled Children. He was a member of the board of managers of the Chicago Bar Association and its representative at the International Congress of Law at The Hague, and he was a committee member of the American Bar Association.